I’ve owned my caravan for over 2 months now and have had more ‘dramas’ than I realised. It’s been a steep learning curve and an action packed time with continuously moving locations.

I’m showing 12 of my dramas in this video. Higher than I realised! 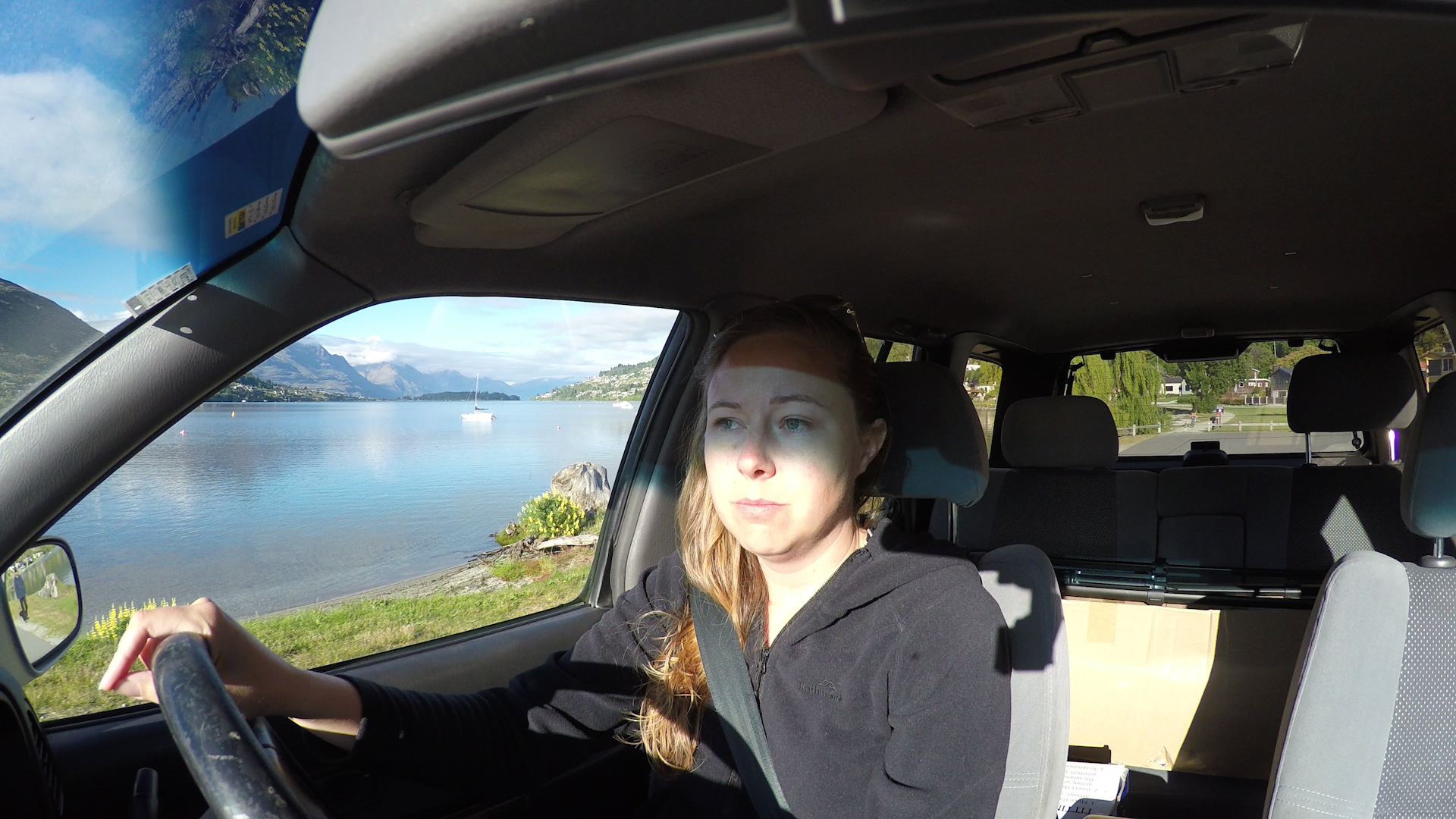 I’d driven around Glenorchy and tried out a gravel road and fording rivers. My car started playing up, with the brakes not sounding right and the whole car shuddering. I wondered if a towing company was required and the car taken to Queenstown, as there’s no mechanic in Glenorchy. Testing the car some more, it seemed to fix itself and was fine the next day, so I hooked up my caravan and drove into Queenstown. Just as I was turning onto the campground road, it started shuddering again when I put my foot on the brake. Time to admit that I needed it checked – brakes are kind of important. Explaining to the receptionist, she gave me the name of 2 mechanics, but warned me that there weren’t enough in the area and I might have a wait. I was in luck! The mechanic also thought brakes were important and I took the car in a couple of days later. Turns out, it was the shoe and drum… the brake components on the back wheel. And water makes it more noticeable… fording those rivers obviously didn’t help. $400 later, I was ready to carry on to the next destination. 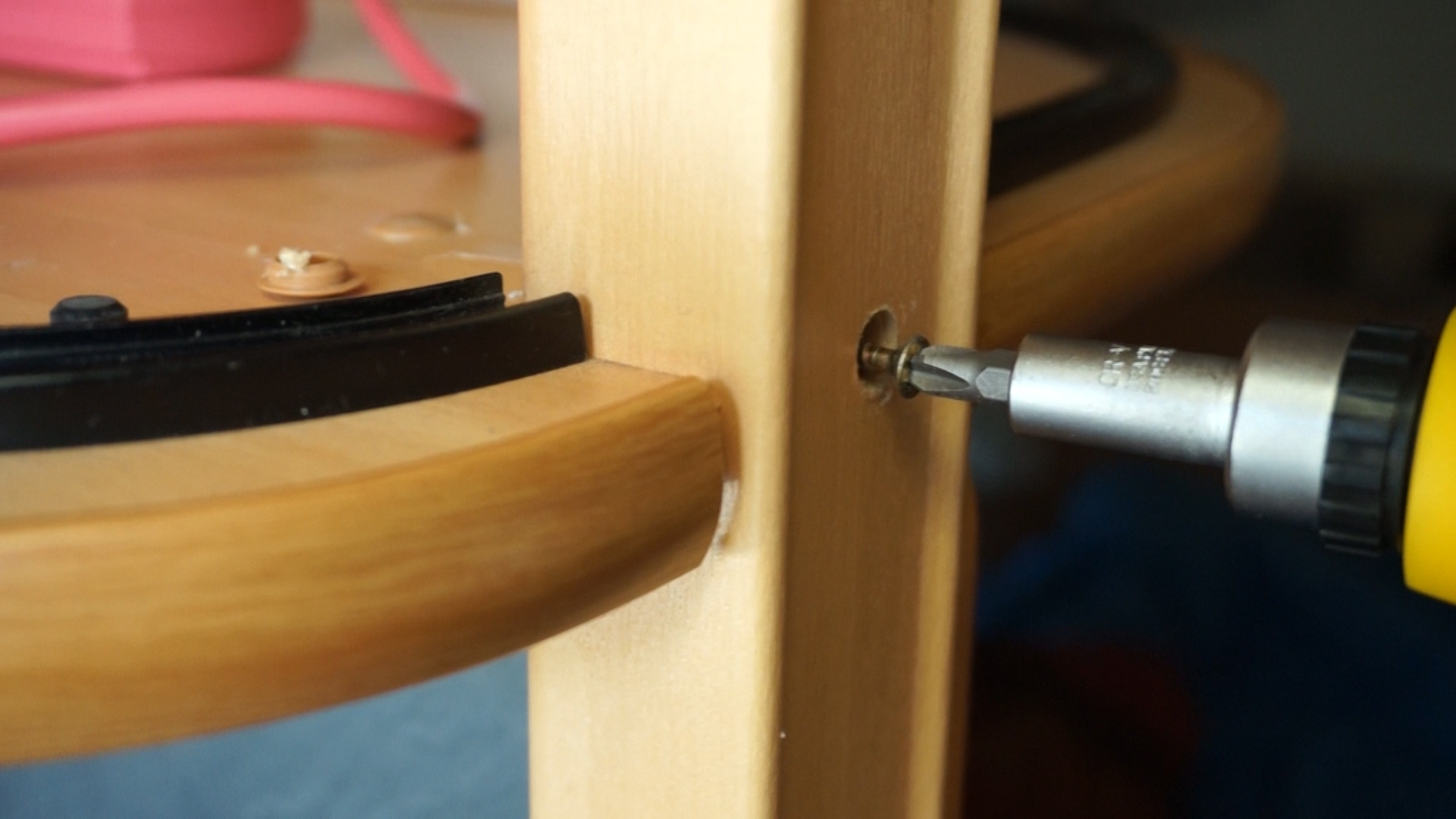 Reaching my next campsite, I saw that the sliding doors to a cupboard had jumped out of their tracks. Then I noticed that the folding kitchen bench was not able to fold up and a screw holding the cupboard in place had split the wood and was sitting on top. It’s not suppose to be there! I’ve been able to take out the screw and moved the folding bench to hold the cupboard in place. For now, I’m taping the bench in place. To fix this, it will require a trip to the hardware store. Any ideas? 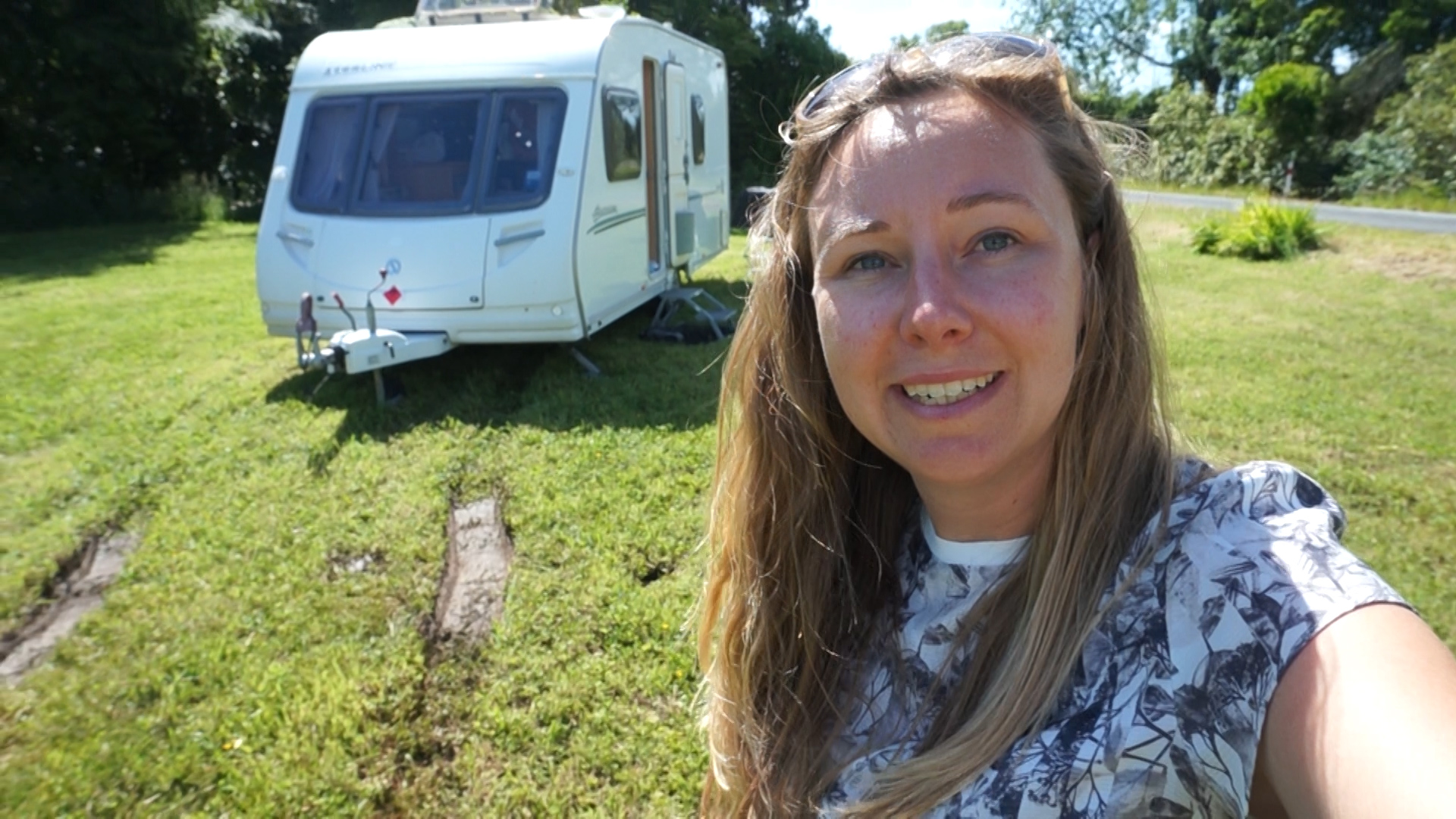 I was invited to stay on some friends land in Karamea. They weren’t there when I arrived, so I decided to drive onto the land where the slop was at it’s most gentle. Turns out, this was the boggy patch. Honestly, it looked fine from the road! I drove on, and felt the caravan become harder to pull. Straight away I was having images of spinning wheels in mud if I stopped, so I charged towards the flat section. And a good thing too – the wheels started spinning when I tried to move again. The caravan was staying where it was for the unforeseeable future. Luckily the weather improved over the next couple of days and we decided to move the caravan to a firmer area before the rain arrived. My friend had his van as an option to pull my car AND caravan if I was still stuck. We also had wood ready to put on the ground. I put the car into 4×4 after some groans from the car (I really need to learn more). And it was fine! It moved off smoothly – altho there were some impressive tyre marks on the ground. 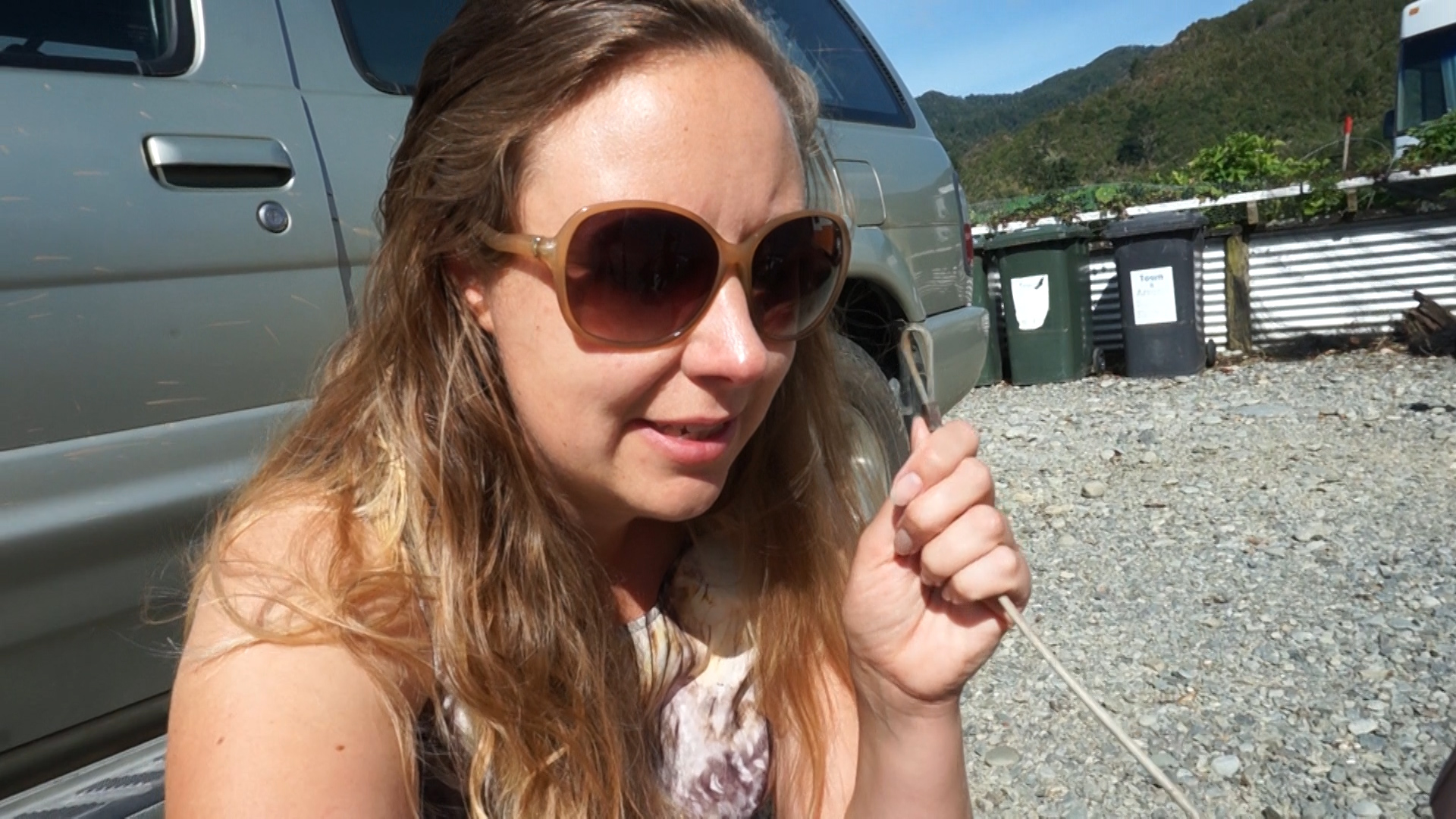 Arriving late to a campsite, I was tired as I parked my caravan. Disconnecting the caravan from the car and driving forward, there was a loud screech. Wondering what on earth I’d done, I saw that I’d forgotten to disconnect the brake chain from the car and the metal connection was completely out of shape. The people next door asked what had happened and if I was all right – talk about embarrassing. I was now known as the girl that didn’t know what she was doing. I went to the hardware store the next day and was able to buy a new part… it’s like it neveeeeer happened. 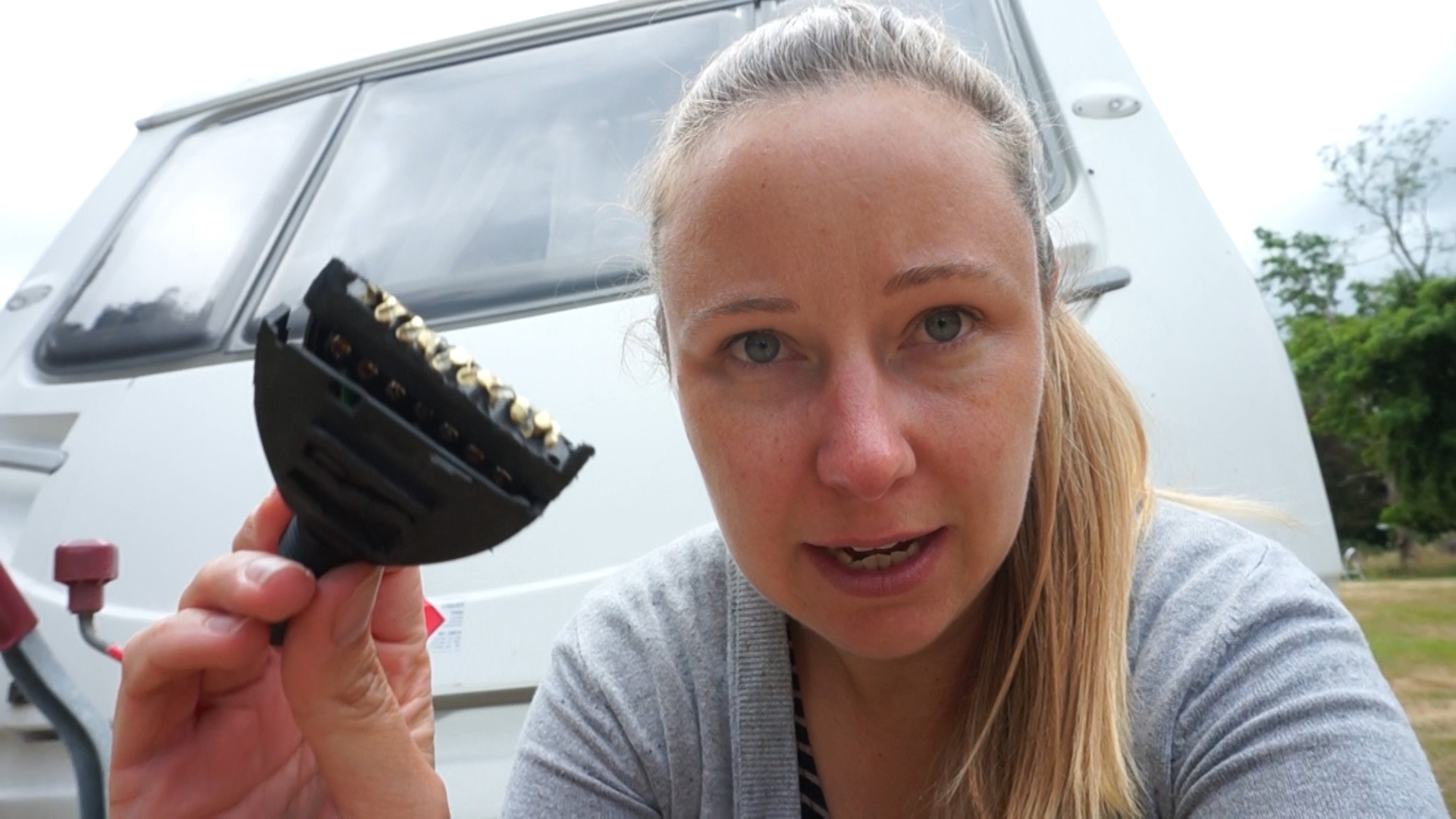 The plug from the caravan to the car that shows my brake and indication light was popping off during my journey. One day, it fell off and was dragged on the road for a long time before I realised. I’m a nice driver and was pulling over to let cars pass – there must have been a lot of concerned drivers with my sudden movements with no indication.

Arriving in Taupo, I rang around to find a trustworthy auto mechanic and worried how much this would cost. Later that day, I enjoyed a cup of tea with the campground owner and his caretaker. Turns out the owner use to be a mechanic. In the end, I was sent off to buy the new part and he attached it for me. I watched what he was doing incase it happened again, but I can see that the new attachment plans to stay attached. This just reminds me of the kindness of strangers and the importance of talking to the people around you.

It’s been an eventful couple of months. I’ve learnt a huge amount and life has felt exciting, even with all these dramas. I am hopefully that there will be less dramas in the coming months…

Have you had any towing dramas? Stuck in the mud? I’d love to hear in the comments below.