It’s been a hot summer in New Zealand this year and I’ve learnt it’s challenging living in a UK caravan in this heat.

My fridge has decided to play up. It’s the worst time of year for this to happen as food goes off quickly and it sounds like the heat has affected a lot of other mobile home fridges.

My 10 years old caravan fridge has always been a little temperamental for me when running on gas. This type of fridge is called a 3-way fridge because it runs on power, gas or battery (if set-up).

Since getting a solar panel, I’ve been trying to run off-grid and not be plugged in as much. Partly to save money and partly because that is the type of camping I want to do.

This summer, the fridge started playing up. 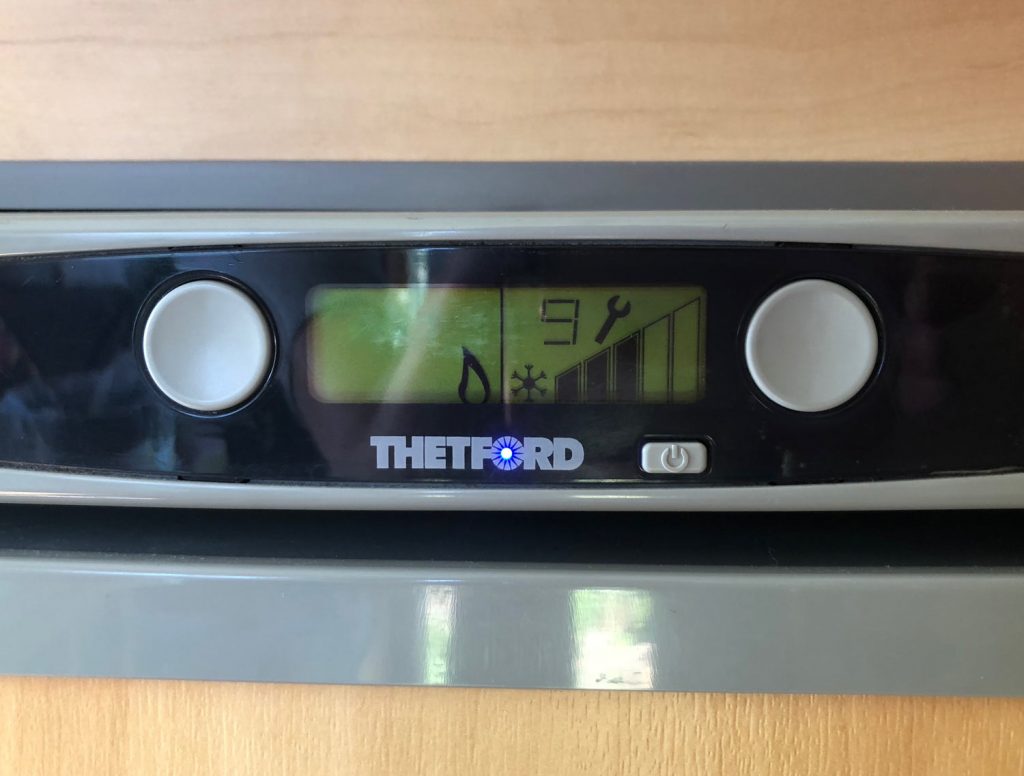 Errors started regularly appearing on the fridge panel that were mainly gas related. Then the screen would go blank from about 11am to 3pm. I started doing tiny food shops as I could no longer trust the fridge.

I tracked down a gas man in the area who specialised in motorhome and caravan appliances, but he was out of town for the week. He sounded like the best option so I waited for his return.

Because the screen was going blank for just those set times, a theory formed that this issue was heat related. The sun was heating that side of the caravan in the mornings. I took off the outside vent covers and even tried an elaborate shade to try cooling it down… and it seemed to help that problem.

I started researching where I could buy a new fridge just incase this one gave up. A self containment officer had recommended getting a compressor fridge. I hadn’t heard of them before. They run on power but are very power efficient. Overall though, getting a new fridge looked like it would cost $2k and more.

Mark from Action LGP Services came out the next week to have a look. I listed all the odd errors with the fridge and he was pretty sure he already knew what it was. He took out a part that tends to get rusty in New Zealand… possibly the burner? Mine was stuck, so he gave it a good clean. The fridge worked… for half a day. Then another error started appearing all the time. Mark looked it up and said it was power related. The next step was to get the battery checked.

As it was a Saturday afternoon the battery shop was closed. I took the battery in early Monday morning. They charged it all day and learnt it wasn’t holding it’s charge. Time to get a new battery.

While this was going on, the fridge wasn’t cold when it was running (in-between all its other problems). 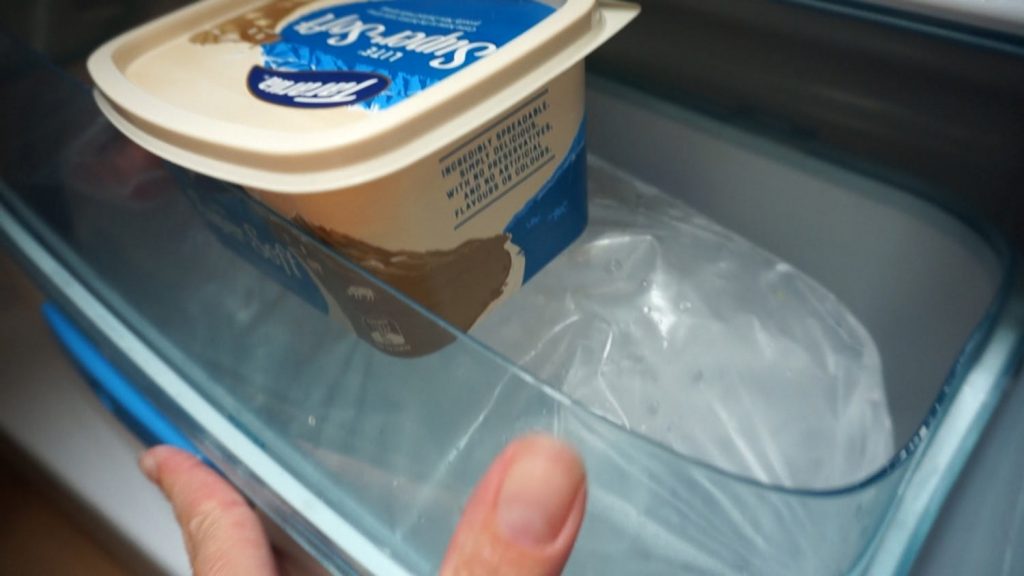 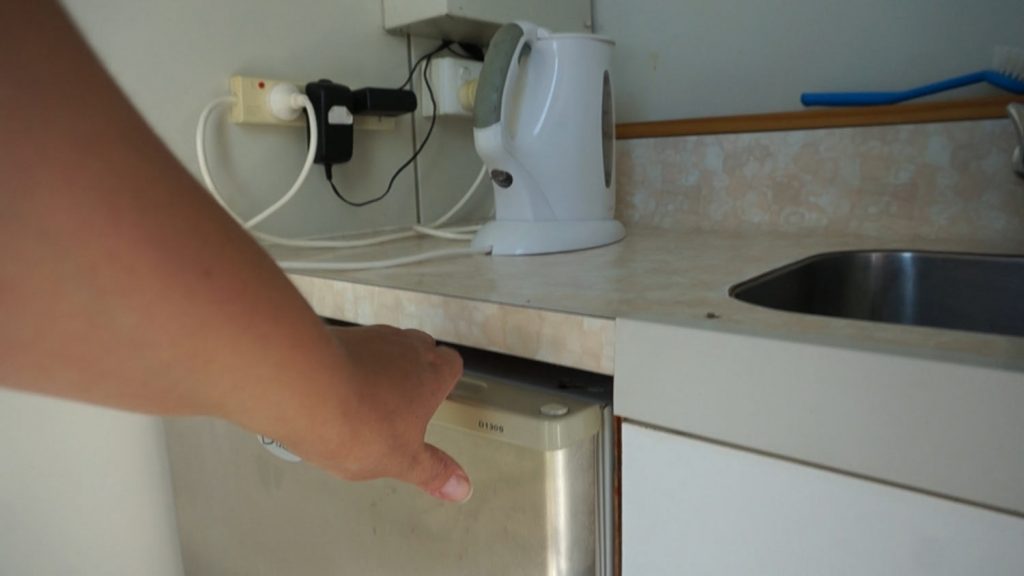 I’d planned to buy bigger batteries before winter. Last winter I really struggled if there were a couple of days rain in a row and no sun reached the solar panel.

My original battery was just 95ah. It’s basically the smallest you want to go. I’m pretty sure I had previously damaged the battery when I didn’t understand how long you could use the battery – turns out it’s just two days on that tiny battery.

Because I was planned to go away for 2 weeks, I wanted the new battery ASAP. I started ringing around and looking online before eventually deciding to go with AA Solar batteries. They were one of the cheapest, they set-up my solar panel so knew my system and they said the batteries would arrive quickly. 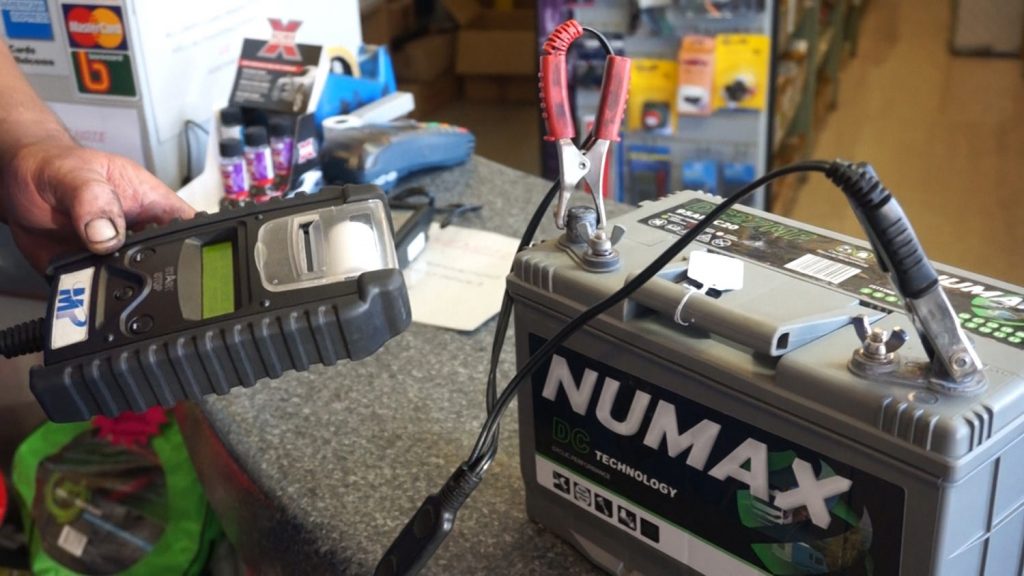 I’d been picking up bits of advice for some time. When I first got the solar panel, I was all about Lithium batteries and how amazing they sounded. But the general talk is how they are still a new technology so are very expensive. Deep cell gel batteries sounded the next best option. They are sealed and don’t require any maintenance. That sounds like my type of battery!

I’d planned to double my battery capacity with one 200ah battery, thinking this would be a huge jump! I found AA Solar has a 150ah battery which weighed 46kg and decided no-one could handle one heavier than that. Plus I’ve always been paranoid about my caravan’s weight distribution after warnings from different people.

Talking to AA Solar on the phone, I was told this battery wasn’t big enough for what I planned to use it for. I’d mentioned my laptop as the biggest powered item, the possibility of winter in the South Island one-day and maybe getting a compressor fridge if mine finally died. Basically I could get a cheaper battery with a shorter warranty or get two 6 volt 300ah batteries with a 5 year warranty. Looks like I was getting the more expensive option!

The grand total for these batteries was $1k and it still wasn’t certain if this would fix my fridge issues. I had been hoping to get grey water tanks soon, but they have been pushed down the list.

The batteries arrived in town and the company helped load the very heavy batteries into my car boot.

I’d been feeling uncertain about my ability to correctly attach these batteries. Another of my neighbours is a semi-retired electrical mechanic and offered to help. I’m glad he did as I would have been stuck a few times.

Between the two of us, we shifted the batteries under the sofa seat. This is where all my solar power controls are. Fuses were taken out. A wire needed cutting and reattaching which is where I would have become stuck. A wire went from positive to negative on the two batteries which made them parallel or series batteries?!?! Still figuring it out. This means the batteries go from 6 volt to 12 volt which is what you want in a caravan or motorhome. But the total amp hours is still only 300. 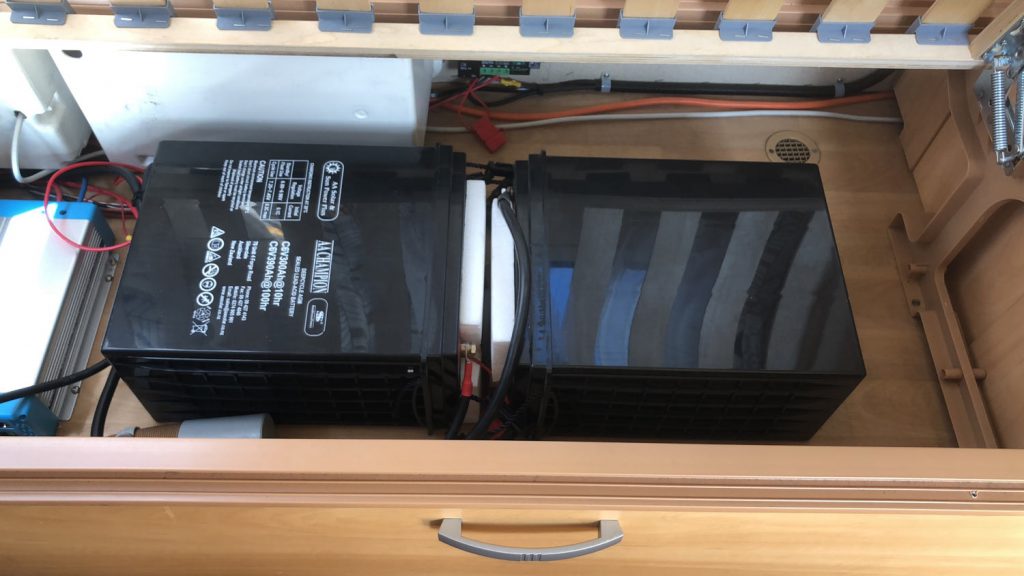 The power error has since disappeared but the fridge hasn’t been cold for the last couple of days. Seems to be ok right now… guess we’ll see how it goes. 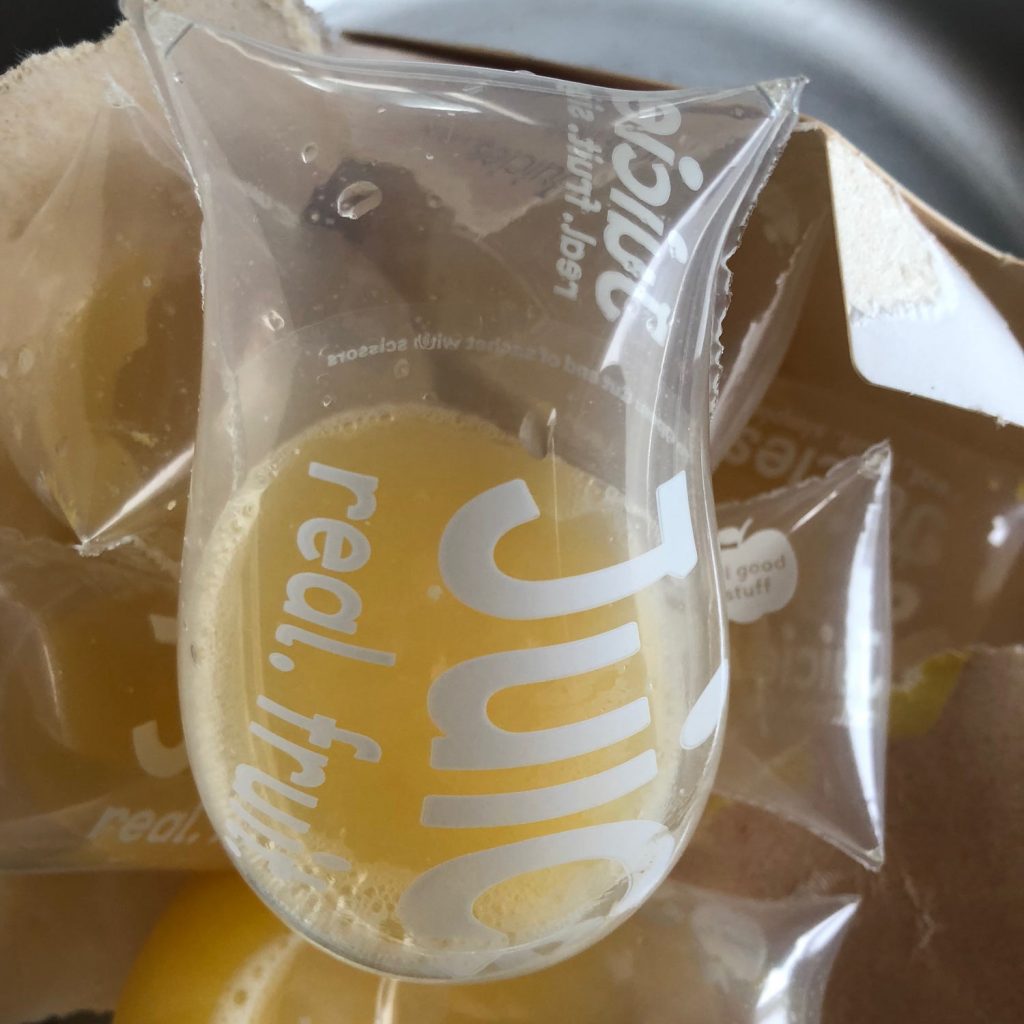 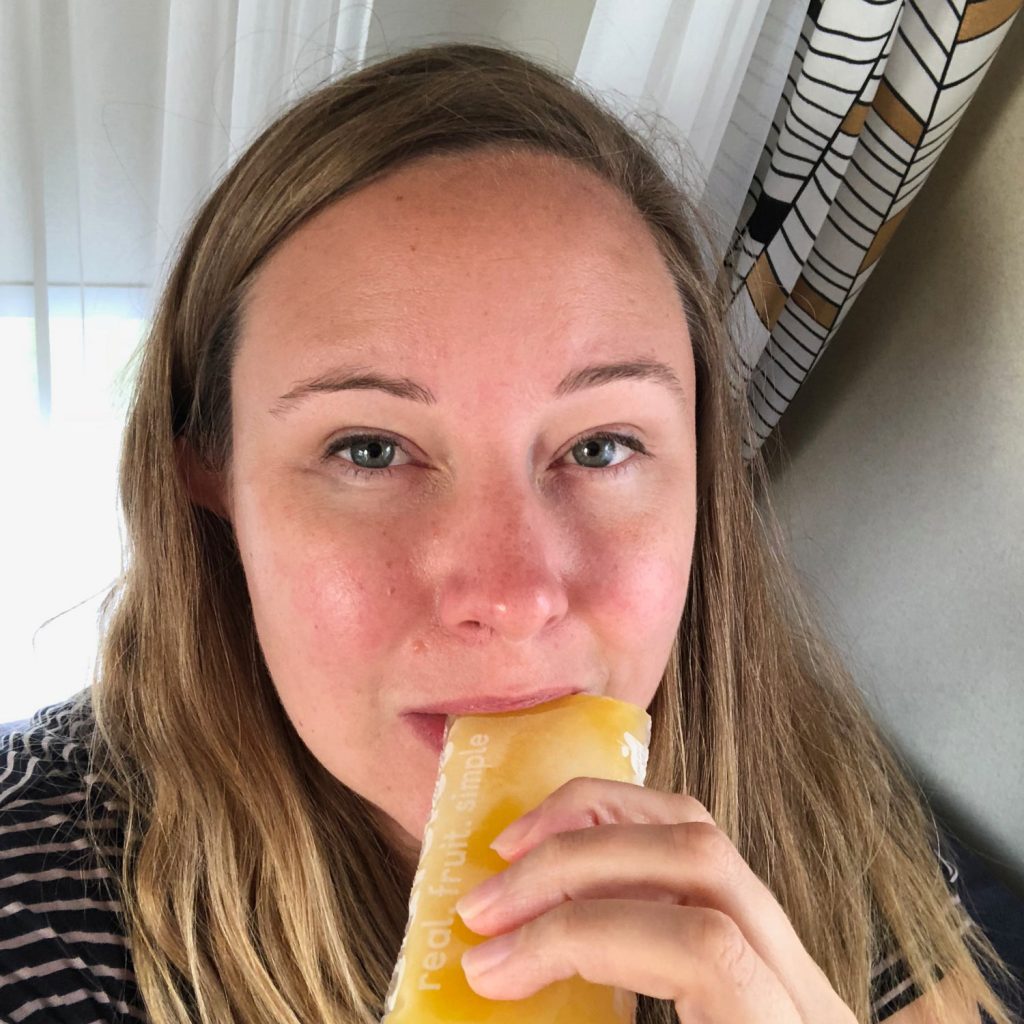 Overall, having a working fridge is really handy! Especially when it’s crazy hot and all you want is something cool to drink.

Have you had fridge problems this summer? Think you know what’s wrong with my fridge? I’d love to hear in the comments below.