Five years ago, I visited Iran. All my friends and family thought I was crazy to go, but Iran ended up being my favourite trip so far. I love exotic destinations where you really feel you are away from home. The architecture and history are unbelievable and the locals were surprisingly friendly. Writing about this really, really makes me want to visit again.

I wasn’t willing to travel on my own, so joined Dragoman on a month long tour from Turkmenistan through Iran to Turkey. During my visit, we saw few westerners. There was a couple traveling in a van and we saw an Intrepid tour – but that was it. 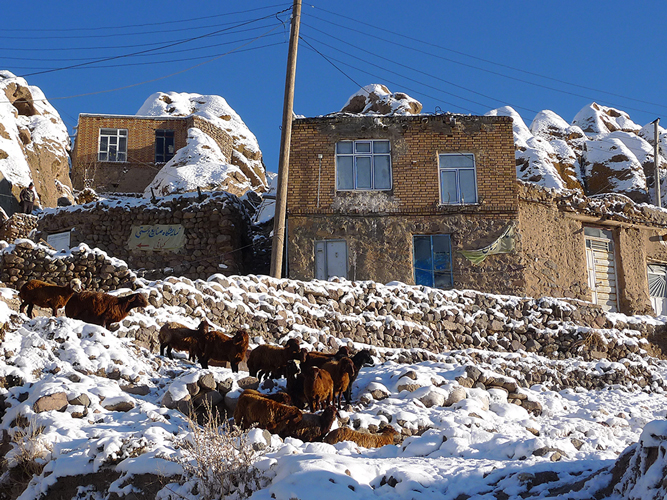 What clothing did you wear in Iran?

All females have to wear a headscarf – it’s just the way it is. The weird thing is, it was acceptable to not wear the headscarf on the overland truck, even though people could see through the window, and we didn’t wear it in our accommodation, even with locals around. When we left Iran and didn’t need to wear them any more, I actually felt underdressed. I’d become use to them! Iran is THE PLACE to buy scarves. We came across a road in Estafan full of trendy scarf shops. It’s the perfect gift idea. I bought a couple for myself and still wear them – as winter neck scarves. 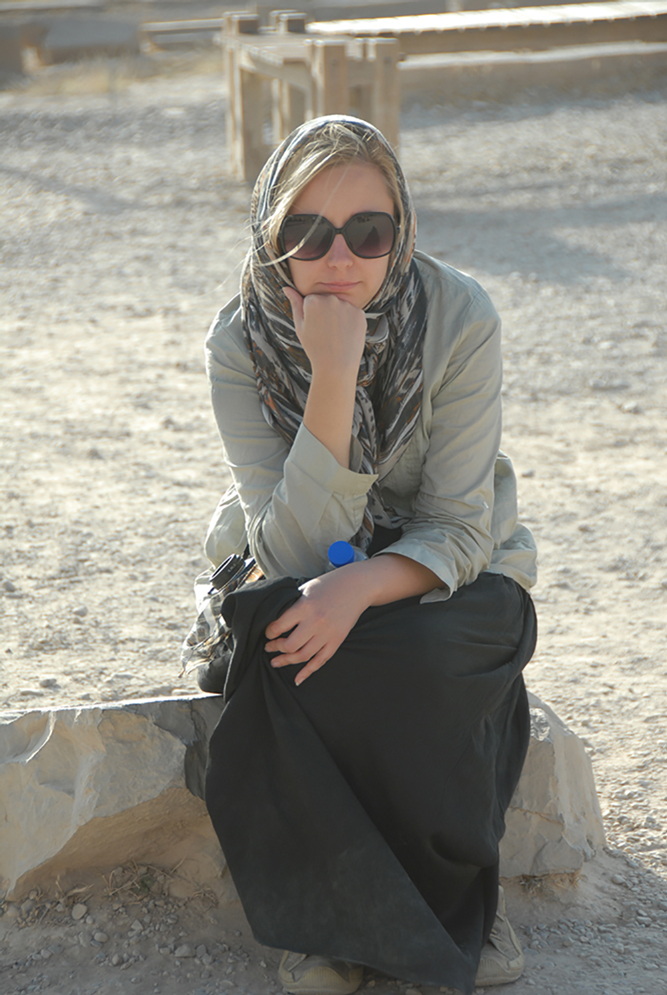 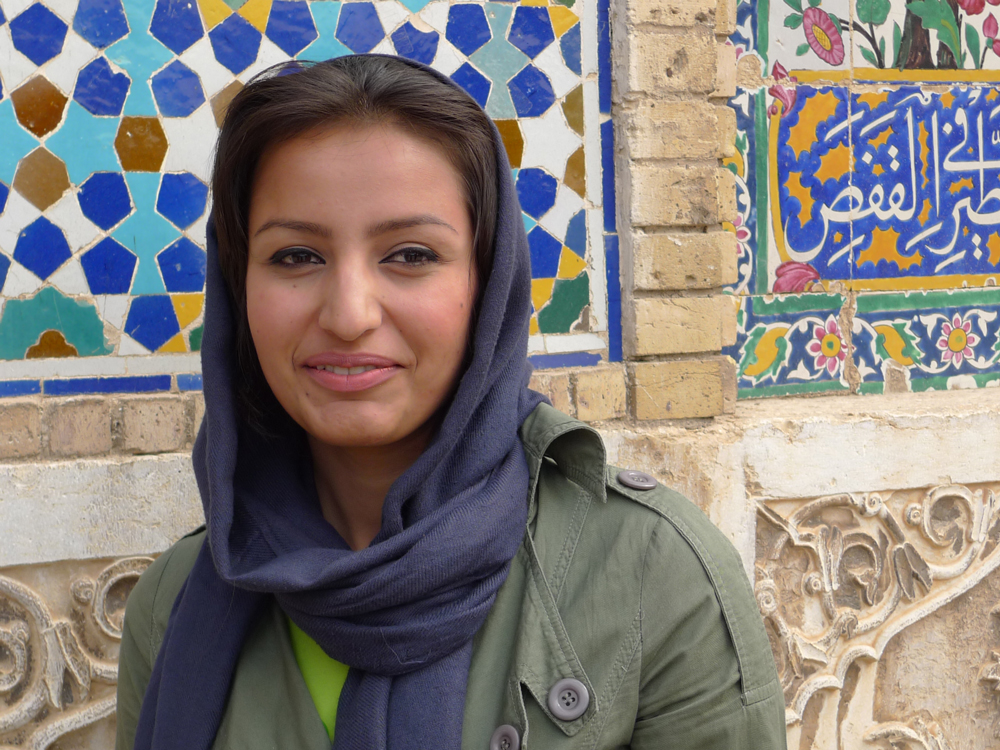 I was unsure what clothes to take on my trip. You need to cover your legs and your top needs be modest, covering your wrists and stomach. Finding clothes to take was surprisingly hard. I’d imagined Iran as a hot destination, so was avoiding the thicker, clingy fabrics, but it snowed for part of the trip. Tehran even has ski fields outside the city. I bought a massive black maxi skirt and only one pair of jeans. Turns out jeans are the Iranian city girls preferred clothing. My maxi skirt got a lot of looks. No one wore anything like it. Women in the smaller villages and the older generation wore enveloping black robes. I suspect the locals thought my black maxi skirt was straddling these two styles.

I went to an Iranian clothes store to find more tops. They are generally made of loose cotton and are neutral colours with long sleeves, modest neck-lines and cover your stomach and bottom. The store was up some stairs and for women only. It was crowded with a few changing rooms – an experience on it’s own.

Men all wore jeans or trousers and a shirt. They were even able to show a bit of arm with a short sleeved shirt. T-shirts where even acceptable, but the locals preferred a collared shirt. 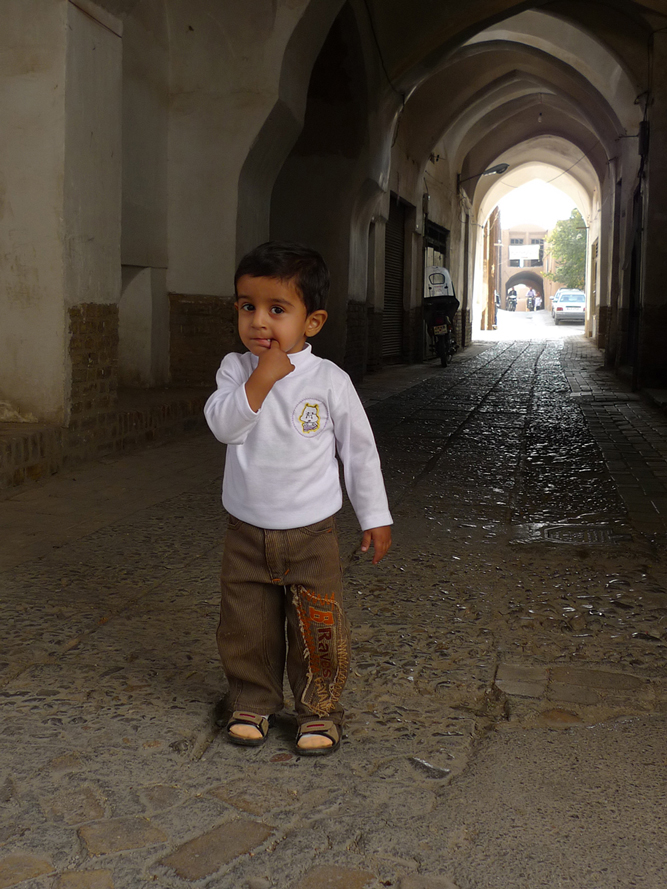 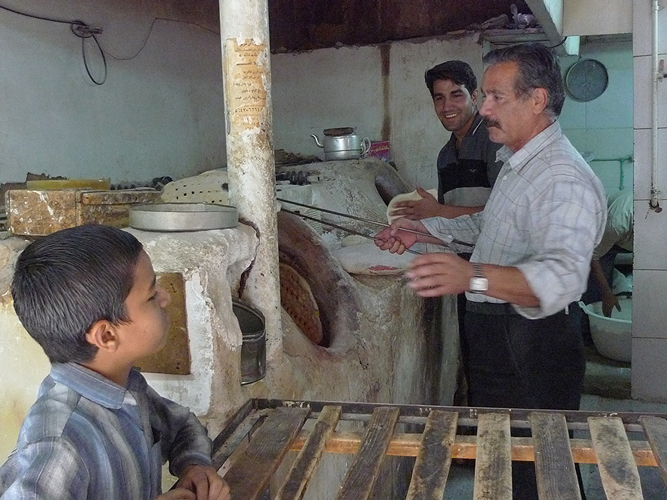 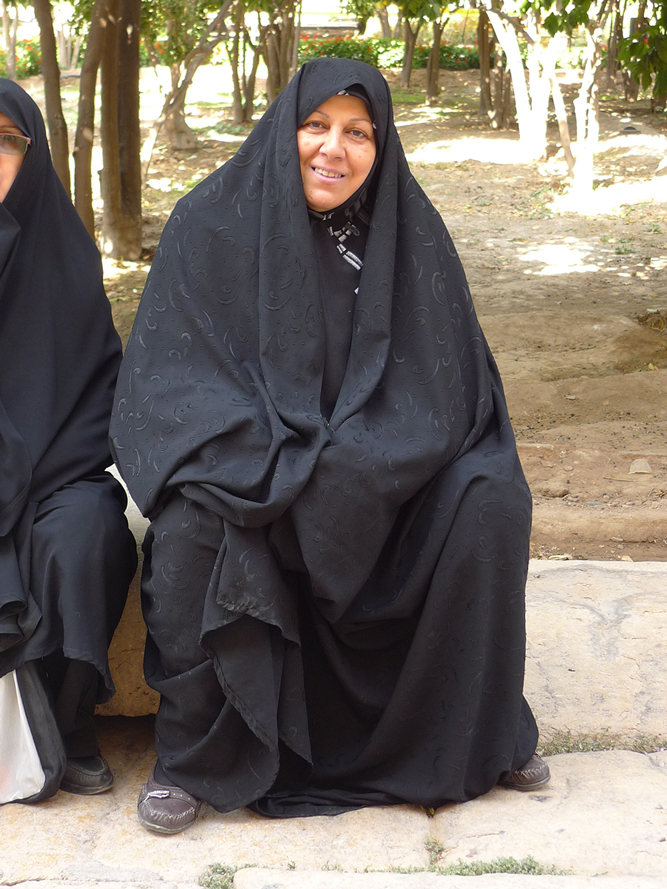 Did you feel safe in Iran?

I’ve never come across friendlier locals. Time and time again we were lost and asked a random person who would lead us to our destination and leave with a friendly wave. But we were cautious. I suspect we expected a less friendly reception, so were always on our guard.

One time we became lost while trying to find a restaurant from a Lonely Planet guidebook. The local we asked, instead of just pointing us in the right direction, happily lead us himself. He was taking us down some empty alleyways and we started wondering how this journey was going to end. We turned a corner, and there was the restaurant.

I personally wouldn’t travel in Iran as a female on my own, because you would get a lot of male attention, but I am sometimes a cautious traveller.

My bottom was grabbed 3 times

Once was disgusting. I was walking down the street with 3 men, and the guy came up behind me and had a really good feel between my legs. I was shocked that he was willing to do this while I was with other western men. My local tour guide was surprised and upset when I told him what had happened and he decided the man must not have been a local.

The funny time was when I was walking on the footpath down a road. A motorcycle with 2 teenage boys drove onto the footpath and one gave me a glancing feel as they drove past. Their cheeky expressions made this more of a humorous moment.

I did do a few walks on my own, but checked that I felt safe in the area. 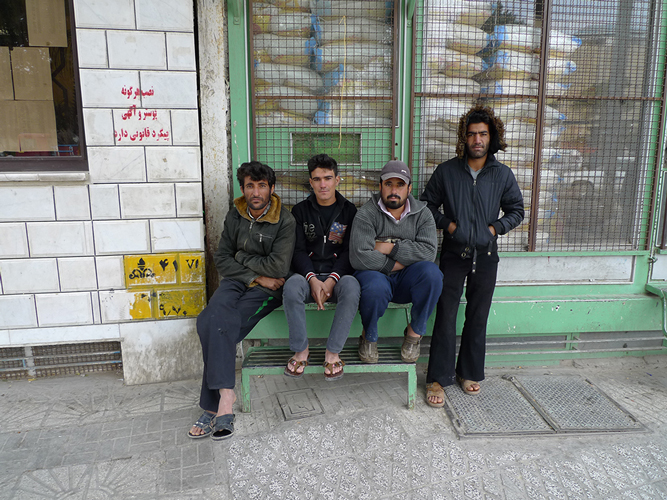 Iran has surprisingly good motorways! The ones we saw were extremely smooth and well maintained. Apparently this causes more accidents, as many locals aren’t the best drivers and the perfection of the road means they can drive faster. We saw plenty of destroyed vehicles sitting to the side of the road. One day I took a taxi out of the city and the driver kept drifting onto the wrong side of the road! Possibly finding the smoothest parts of the road? I was glad when it was over.

Petrol is extremely cheap in Iran. If I remember correctly, it was 15c a litre for locals and 35c for tourists. Tourists also had a petrol fee to pay when leaving Iran. 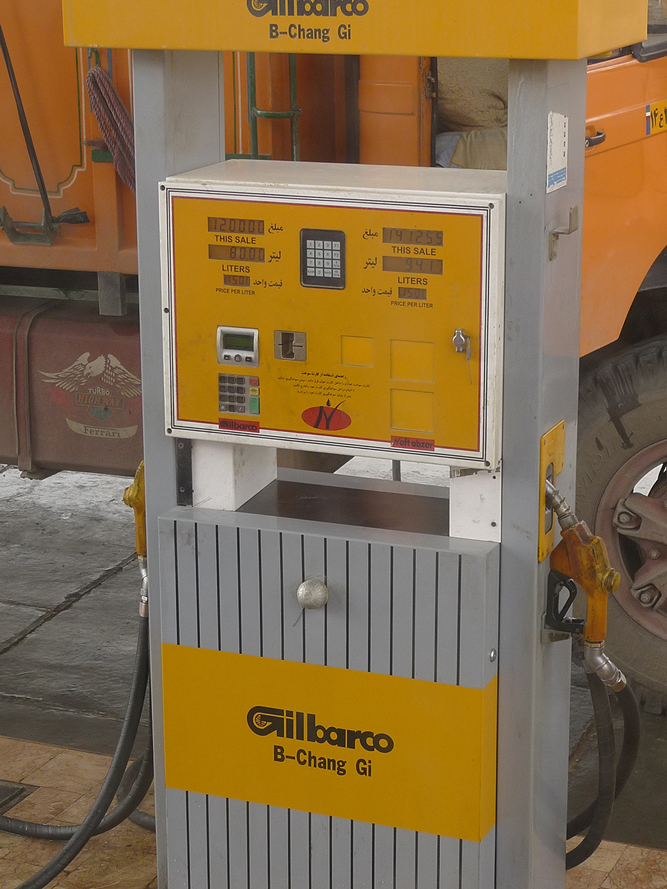 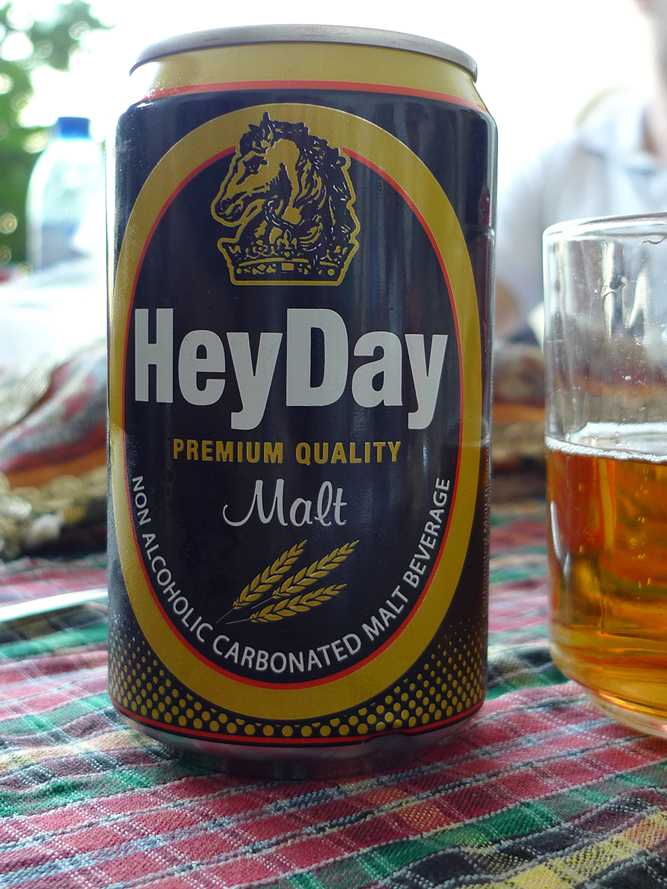 If you’re desperate for a beer 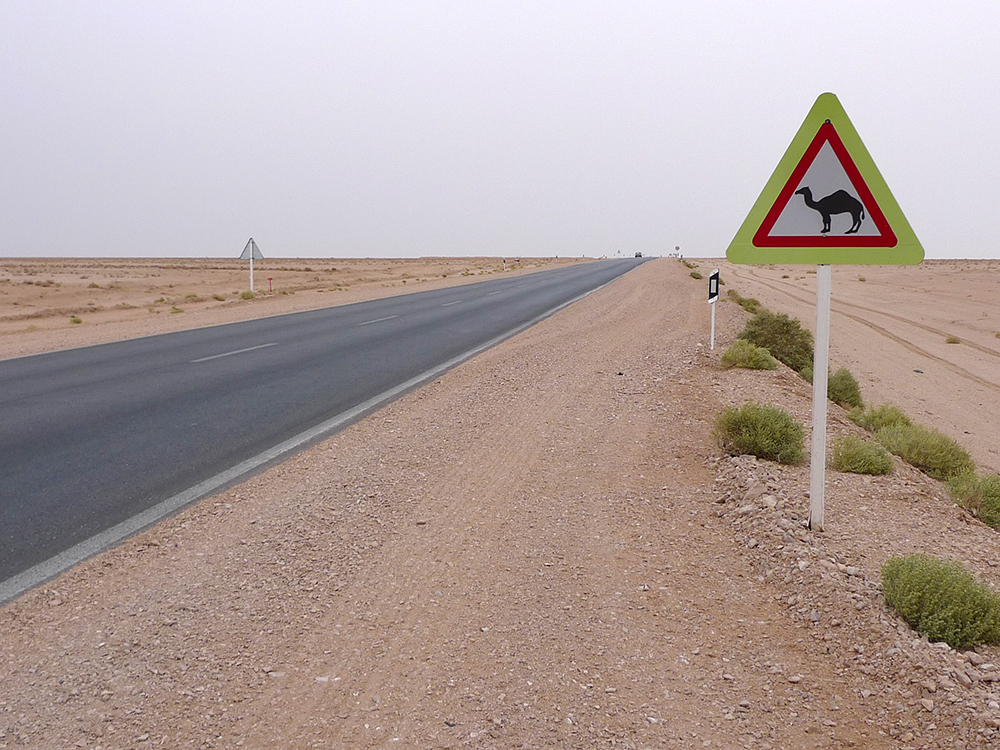 Is there really no alcohol?

Yes, that is correct. No alcohol in Iran! We had a confessed borderline alcoholic on the trip who wondered if he’d survive. He thought this was the perfect way to detox. Our evening activity became shisha smoking with tea.

Below are some destination ideas – they are the more well known spots and I personally liked them more than Tehran. 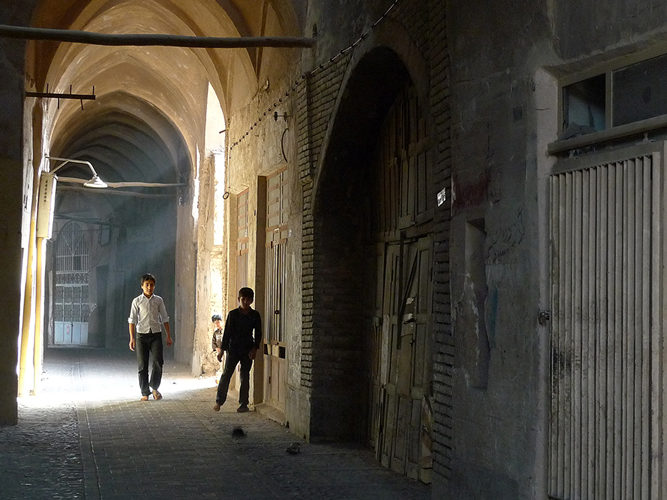 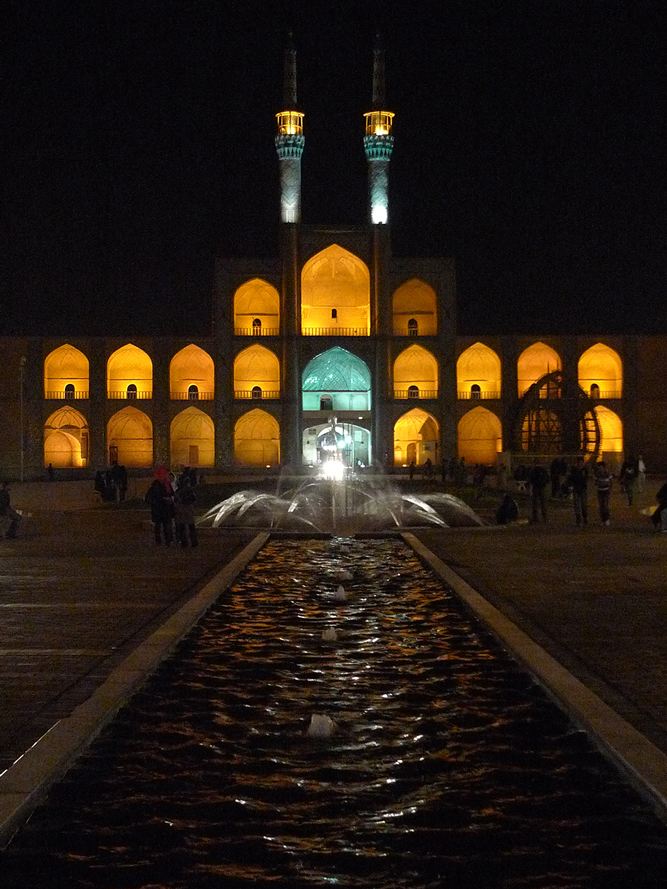 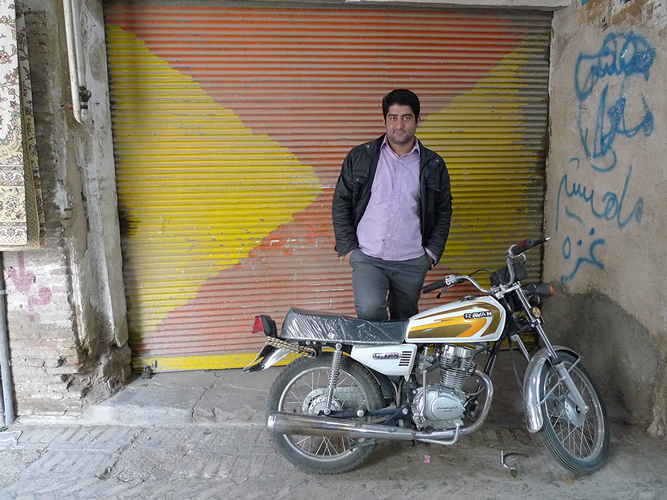 Situated in a dry desert, Yazd feels like you’ve stepped back in time. I remember listening to the call to prayer and feeling that I was in another era. It has a lot of charm with some beautiful alleyways and earth toned buildings. The old buildings have clever wind catching systems to keep it cool. Amir Chakhmaq Complex is worth a visit – it’s a popular photo destination. 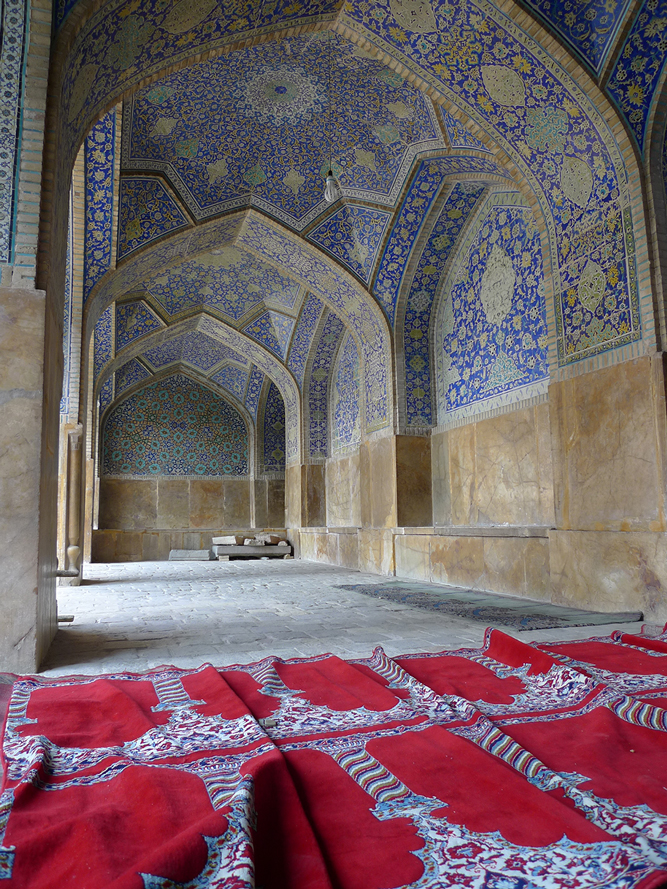 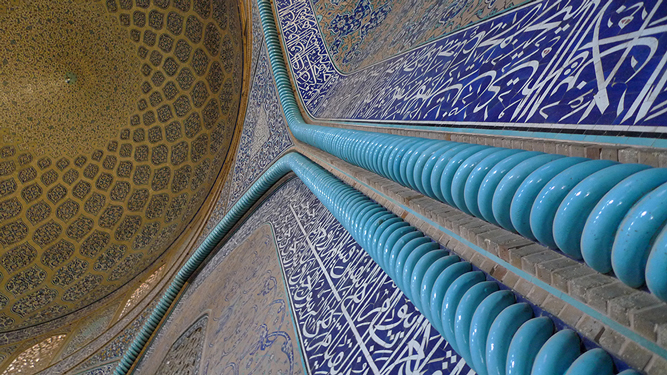 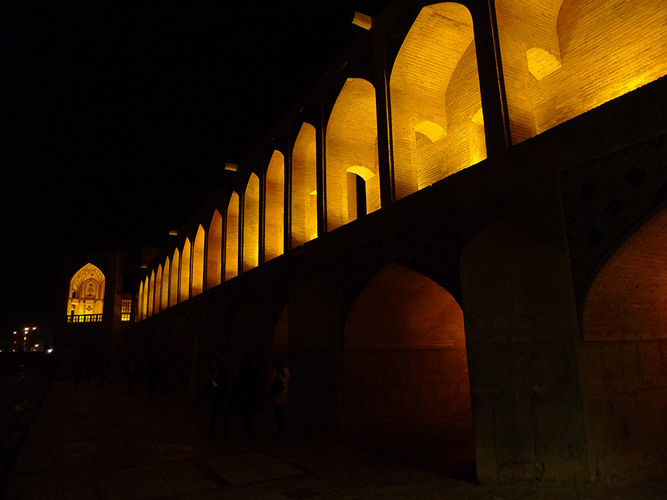 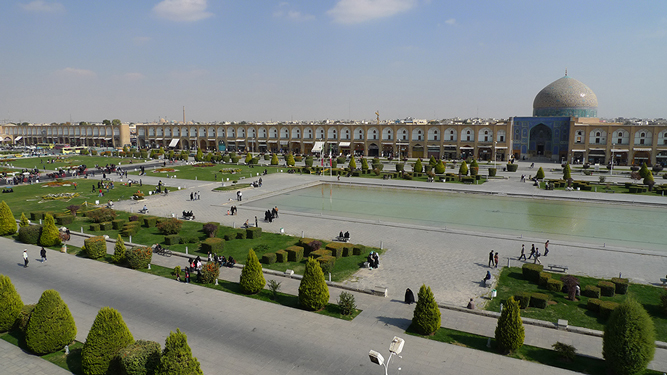 Either written as Isfahan or Esfahan, this was one of the largest cities in the world in the 17th century. Naghsh-e Jahan Square is absolutely mind-blowing with it’s grand architecture and market. The square is also one of the largest in the world and you can easily spend a day looking around. It’s a modern city compared to Yazd and I think this was my favourite place in Iran. If you were considering buying a rug, this is the place. Allāhverdi Khan Bridge is very popular for photos. There was no water in the river when I was there, but heard it started to full a day later. 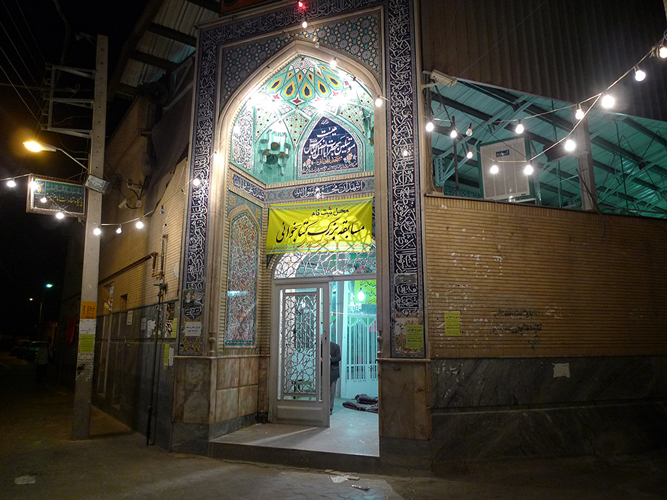 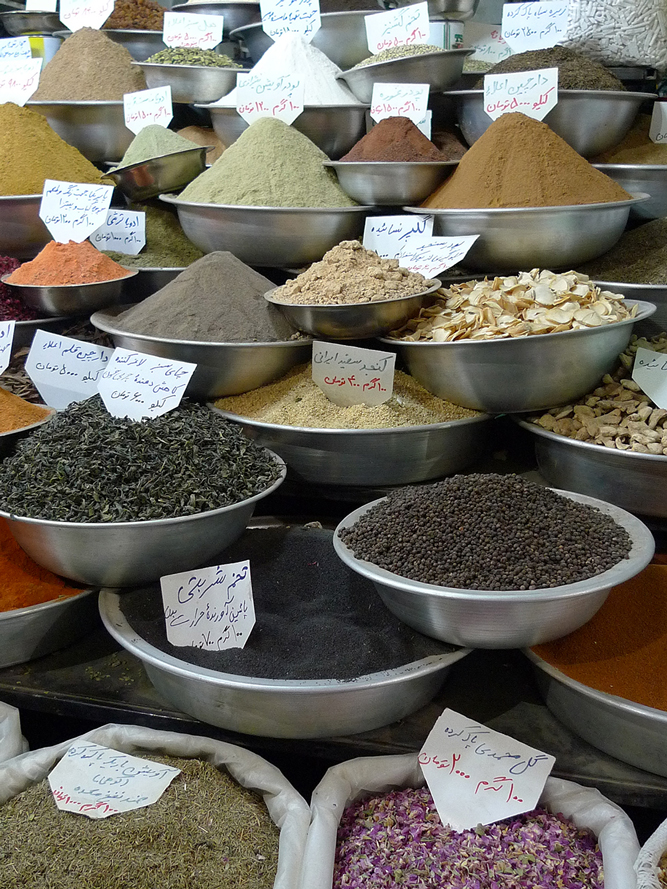 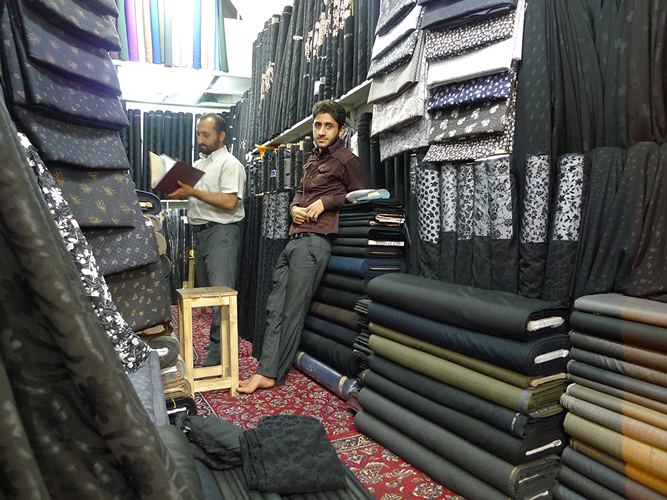 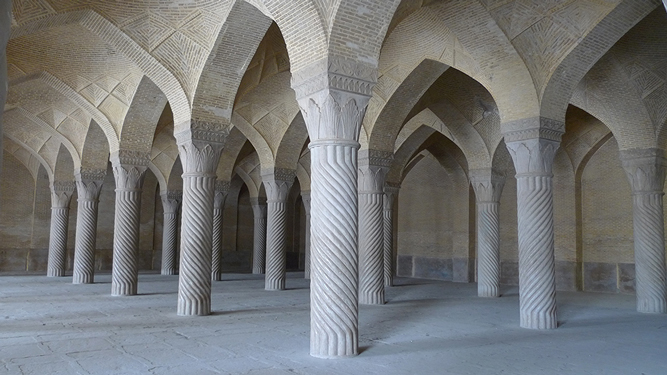 Shiraz is known as the cultural city – the city of poets, literature and flowers. It’s just a really nice city! It had a fantastic market and plenty of stunning buildings and gardens. The Vakil Mosque is worth a visit for photos. 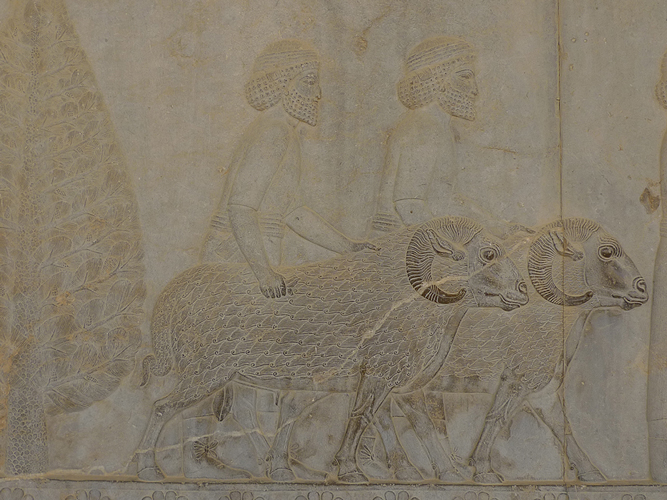 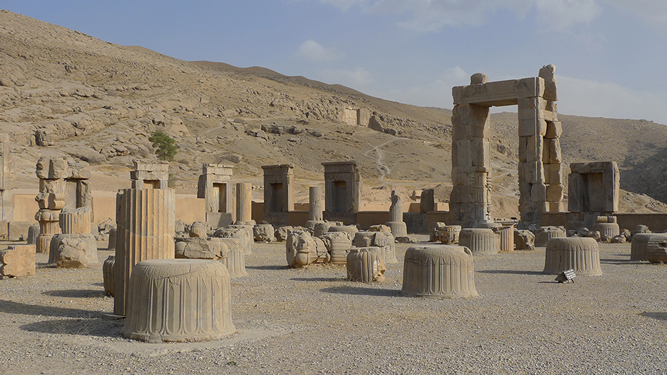 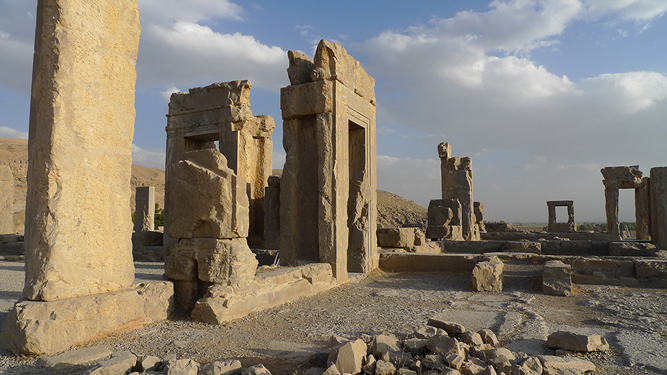 All the cities above were capitals at some point, but it’s harder to believe that this ruin was the capital of the old Persian Empire from 550–330 B.C. The Persian empire was the largest empire at the time and was ruled from this now ruin in Iran, designed to impress visitors of the king. Iran has such an epic history –  they had such impressive knowledge and advancements compared to the rest of the world.

Do you want to go but not keen to visit on your own? Iran is becoming a more popular travel destination and tour companies are organising more trip. Here are some tour options:

Dragoman is the company I went with. They do overland truck tours where some people on my tour travelled for 3 months from China, while I was on it for only 1 month. They tend to get a range of ages. They started bypassing Iran after my trip, but looks like it’s an option again.

Oasisoverland is also an overland truck tour. They usually have younger people. I have been on one of their tours in South America.

Intrepid is great for really getting to know the locals and their way of life. They have small groups and take public transport as often as possible. I have been on a few Intrepid tours and will go on them again in the future.

G Adventure is another company I’ve seen around and heard good things.

Shiazurbanadventures is the website of the local guide we had in Iran, who has started his own tours in Shiraz. Mostafa is a friendly, relaxed and playful guide.

Iran is still one of my favourite destinations and I recommend adding it to your travel wish-list. It might have a bad reputation, definitely check what areas are safe before you go, but the reality is much friendlier than people expect.

Do you have any questions? Ask in the comments below and I will try to answer them!