A Series of Unfortunate Caravan Accidents

I was moving the caravan from Hawkes Bay to Taupo with the plan of staying a few days before heading north. I’d just set up the caravan in Taupo when everything started to go wrong. My phone broke,  I was asked to leave the NZMCA park and then I got a flat tyre on the caravan!

The first thing to go wrong was that my phone completely stopped working. The apple icon just flashed on and off even after putting it on charger. I kept trying over a couple of days with no luck.

It’s strange how dependent we become with our smart phones. It is my clock, alarm clock, map, taxi, weather forecast, entertainment as well as a communication device.

I’d cracked the screen recently and eventually decided that it was properly dead and went to a mobile store to buy a new phone.

This is quite an embarrassing accident. I had set up the caravan and was talking to a friend through my laptop (since the phone wasn’t working) when a custodian of the park appeared at my door and started telling me off. He really wasn’t happy with my grey water tank. I went outside with him and we had a chat.

I have been cheeky with the grey water tanks – I confess. When I got my Self Containment, the officer converted the waste tank so there was no chance of water falling onto the ground. Everything is sealed. There is even a clear pipe that goes up which warns you when it’s full and designed to start flooding your shower as a guide.

The problem I have is that it’s just too heavy for me to lift into my car boot to drive to the dumping station, if there is none at the campground. 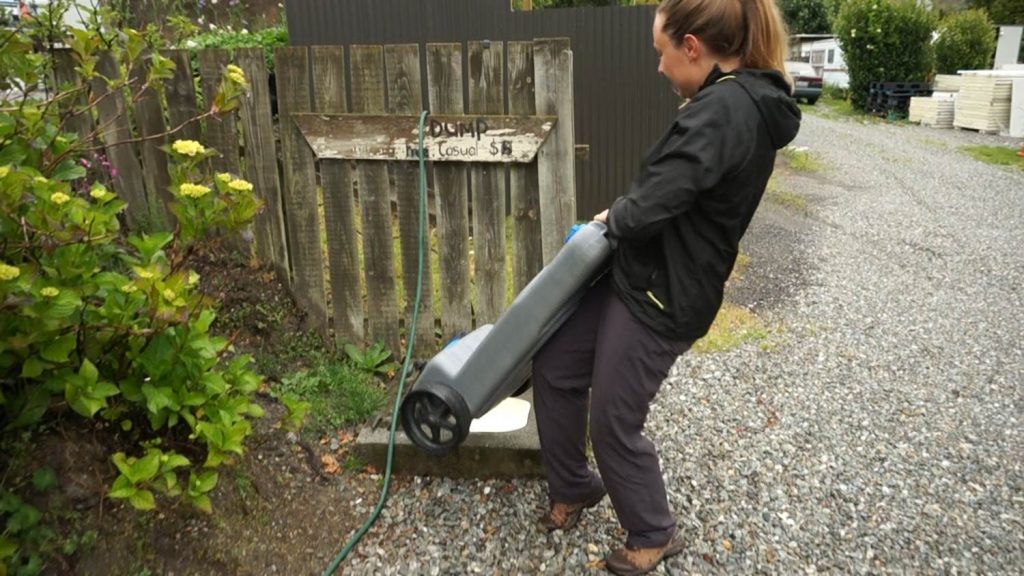 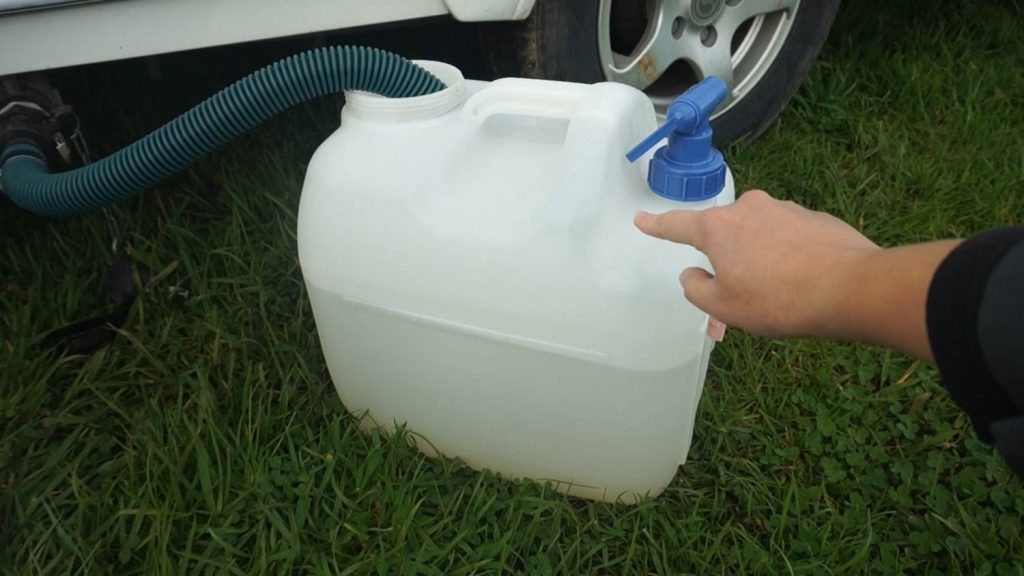 When originally faced with this problem, I came up with some complicated ideas like a car ramp, pulley system or water pump. Then I thought of a simpler idea… why not have two smaller tanks!

What made the custodian unhappy was that it could possibly overflow and get waste water on the ground.

I didn’t have my correct official tank with me, so I was asked to leave.

Being genuinely curious, I asked a whole lot of questions and I’ll pass on to you what I’ve learnt: 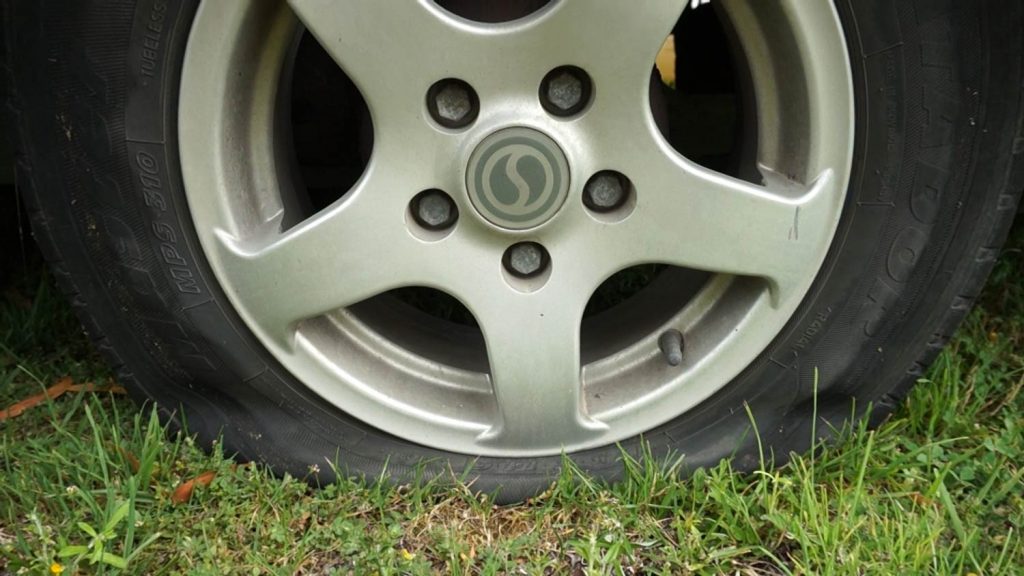 Accident 3: Flat Tyre on the Caravan

I moved to a campground I’ve been to before. It’s on the edge of Taupo along the Thermal Explorer Highway. It’s down a gravel road and is very peaceful. There are birds and llamas wondering around.

I parked next to a field before noticing the flat tyre on the caravan.

By this point, I was tired. The last thing I wanted to do was change a tyre and decided to wait a day.

Refreshed, I went to take out the spare tyre from under the caravan. It’s an AL-KO brand and looked like no one had touched it since being fitted in 2007! I found some very helpful instructions on Caravan Talk. After much fiddling around I realised I wasn’t going to be able to get the spare wheel out. 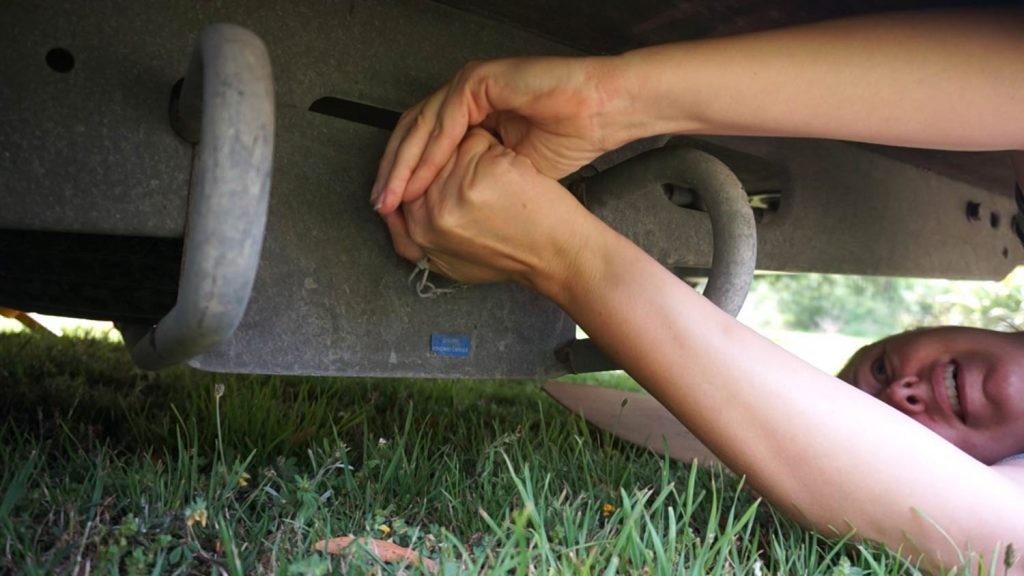 It now looked like I’d need to take the spare wheel off and take it into town. As it was Sunday, I needed to wait until the next day.

The people at the campground are very helpful and friendly. The owner had previously helped me when my break lights connection from car to caravan needed to be replaced. This time, the caretaker lent me his jack (I’ve since bought one) and even loosened the screws on the wheel rim for me. But I was determined to learn how to do this myself!

Taking the tyre off was easy enough and I took it to Terrys Tyres in Taupo – recommended by the caretaker. They took one look at it and said I’d need a new tyre. Because it was an unusual size they needed to order one in!

Luckily it only took a day to arrive. I was nervous about sleeping in the caravan with it sitting on just the jack and stabilising legs. They kindly lent me a tool to support the caravan just incase the jack gave way.

A very long process to replace the tyre – but for it to happen while I was in a campground was the best place.

I’m now in the process of getting a quote for grey water tanks fitted under the caravan and he’ll also look at the spare wheel.

Have you had a similar bad day? I’d love to hear in the comments below.